Irritable bowel syndrome (IBS) is a common chronic intestinal disorder. It is estimated that some 10 to 15 percent of people suffer from it. A great deal is already known about the disease, but some pieces of the puzzle are still missing. There are also quite a few myths that are doing the rounds. What is fact and what is myth? In this article we have outlined eleven different IBS related statements that are a myth or fact.

1. The cause of IBS in unknown.

Fact! Doctors aren’t sure what causes irritable bowel syndrome. The exact cause is still unknown. The most common symptoms of irritable bowel syndrome (IBS) are pain in your abdomen, often related to your bowel movements, and changes in your bowel movements. These changes may be diarrhea, constipation, or both, depending on what type of IBS you have.

Myth! What is clear is that stress is a strong influencing factor and can sometimes be a trigger for the development of IBS. In essence, IBS is a disorder of the connection between the intestines and the brain. The complaints are not the same in all patients. One patient may suffer from constipation, another from diarrhea. And yet another patient will mainly suffer from a disturbed microbiome, while another patient will mainly have stress-triggered symptoms. In order to treat IBS properly, all factors must be looked at.

3. IBS is similar to (or the same thing as) IBD/Crohn’s/colitis.

Myth! Crohn’s disease and ulcerative colitis are types of inflammatory bowel disease (IBD). While IBD sounds similar to IBS, they are very different from each other. IBD is an organic disease characterized by the presence of inflammation in the intestine. In IBS, there is no visible disease and the symptoms are a result of an improperly functioning digestive tract. IBS does not turn into IBD, and people with IBS aren’t at an increased risk for any of the complications associated with IBD, such as surgery, requiring an ostomy, or developing colorectal cancer. However, it is possible to have both conditions. Go to www.badgut.org/information-centre/symptom-chart/ to view a table that demonstrates the differences between IBS and IBD.

4. If you suffer from constipation due to irritable bowel syndrome, it is better not to eat fiber.

Myth! There is no such thing as a typical IBS patient and therefore no specific treatment that will work for everyone. There are many lifestyle modifications that can go a long way in controlling what you eat, your physical activity and fitness, and becoming a more relaxed person. For a healthy bowel movement, everyone needs fiber. These are essential for your bowels. Do you suffer from an irritable bowel? Then determine, together with a specialized IBS-dietician at HelloDoc Health, how much fiber your gut can handle and what food is suitable for you.

5. Cutting out dairy and gluten can get rid of IBS symptoms, since IBS is just another term for these intolerances.

6. Laxatives should not be taken if you have IBS, because they can make your bowels lazy.

Myth! If fiber is not enough to ease hard bowel movements, you can try laxatives. Many people are afraid to take laxatives for a long time, because it would lead to so-called ‘lazy bowels’. This is absolutely a myth, softening stool consistency has no effect whatsoever on the enthusiasm with which your bowels perform their work! On the contrary, if the composition is softer, the bowel movement itself will be smoother. Most laxatives are safe and generally have few side effects.

Myth! Many individuals believe that a proposed disorder called ‘leaky gut syndrome’ causes many ailments, often including IBS. The claim is that toxins and bacteria leak through damaged sections throughout the digestive tract, and then enter the blood stream where they proceed to wreak havoc on the body. However, there is no scientific evidence that this disease even exists, let alone causes IBS, which is a functional disorder, not an organic disease.

8. In the majority of patients with IBS, symptoms are triggered by certain foods.

Fact! Your daily diet is enormously important to the course of irritable bowel syndrome. Food can trigger or exacerbate symptoms, partly because of the irritating effect that filling the stomach has on the rest of the digestive system. But the different components of the diet will also determine how the intestinal contents are composed. The more difficult to digest nutrients, the more these can have an effect on the microbiome. General dietary adaptations can therefore reduce symptoms, for example: sufficient fiber, not too much fat, limiting coffee and alcohol (and not smoking).

The most successful nutritional therapy now used in the treatment of IBS is the so-called FODMAP diet. FODMAP stands for “Fermentable Oligosaccharides, Disaccharides, Monosaccharides And Polyols.” The low-FODMAP diet was developed by doctors and dietitians at Monash University in Australia. Clinical trials of people with Irritable Bowel Syndrome (IBS) has been shown to help IBS suffers reduce their symptoms in up to 75% of patients! 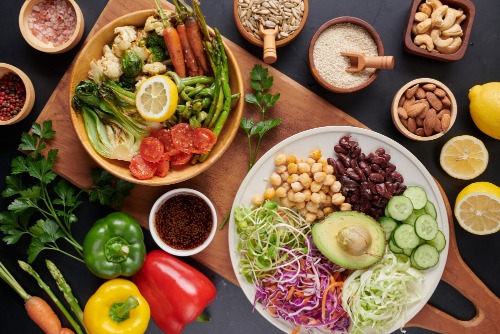 A low FODMAP diet restricts certain carbohydrates, but this isn’t the typical low-carb diet. It only eliminates high FODMAP foods and can be individualized, so you only restrict those that trigger your symptoms. Most people don’t have problems when eating FODMAPs, but for some people they can cause cramping, bloating, gas, or diarrhea. FODMAPs are a problem for some people because they draw more fluid into the intestine and create more gas. They create more gas because they are more easily fermented in the gut. The combination of additional fluid and increased gas can slow digestion, resulting in gas, bloating, pain, or diarrhea.

High FODMAP carbs that you should avoid include:

Low FODMAP foods to enjoy instead include:

If you’d like professional advice on how to best adopt a low FODMAP diet that still meets your nutrition needs, please schedule an appointment with our nutritionist.

9. Painkillers are best avoided with IBS.

Fact! The preferred choice is to treat IBS with antispasmodics and antidepressants. They are not perfect (no medication is), but a decent efficiency and an acceptable palette of side effects make them first choice in IBS. In any case, they are preferable to other, more classic painkillers such as, for example, NSAIDs or morphine-like products. These may have short-term analgesic effects, but have a number of unpleasant side effects that particularly torment the gastrointestinal system, addiction risk and risk of causing heart failure. A paracetamol on occasion won’t hurt, but NSAIDs like ibuprofen and diclofenac or morphine-like products like tramadol or oxycodone are best avoided at all time.

Fact! Scientific research has shown that hypnotherapy can indeed reduce IBS symptoms. Medical hypnotherapy can induce a state of relaxation that causes your pain signals to be suppressed. Look for a well-trained therapist who also understands exactly what a functional intestinal disorder entails.

Fact/Myth.  That probiotics are good gut bacteria is a fact. This is because these bacteria survive the stomach acid through which they reach the intestines. This allows them to contribute to the balance of the microbiome. Therefore, much research has been done on the effect of probiotics on intestinal problems and disorders. It is still unclear which good bacteria cause good effects and how many of these bacteria we should take for how long. More research is therefore needed.

More information or an appointment?

Would you like to discuss your bowel problems with a specialist doctor, nutritionist or therapist? Book a consultation at HelloDoc Health!

We are here to help you!